Skip to Main Content
Napa Valley Museum Yountville » Current Exhibition » Lucy Liu: One Of These Things Is Not Like The Others

Lucy Liu: One Of These Things Is Not Like The Others

On exhibition in the Main Gallery
February 1 through August 2, 2020

“Lucy Liu: One Of These Things Is Not Like The Others”
the first U.S. museum exhibition of paintings and sculpture by Lucy Liu, the artist, actress and advocate.

An accomplished artist whose work was recently exhibited at the National Museum of Singapore, Lucy Liu has created an impressive collection of deeply personal artworks, ranging from large-scale paintings to inventive mixed media works to intricate wood sculptures.

Lucy Liu is an award-winning actress who has appeared in films, on television and on Broadway.  She is also a respected director and dedicated UNICEF ambassador, advocating for children’s health and protection since 2004. Liu will visit Yountville to serve as Keynote Speaker at the Museum’s February 25 “Phenomenal Women” fundraising luncheon, held in the Museum’s main gallery in Yountville, and has generously donated an original work of silkscreen and acrylic on paper: “Freshly Squeezed III, 2013” for auction to benefit the museum’s arts education programs.

This special exhibition is NOT included with NARMS membership, but members are welcome to visit our Spotlight & History Gallery exhibits. This exhibit IS included as part of the Museums On Us program through BofA/Merrill Lynch.

The exhibition will feature video of the creation of her silkscreens and found object series, and other video and audio illustrating her influences and creative processes. It will also incorporate an example of traditional Japanese Shunga hand scroll, provided by San Francisco’s Asian Art Museum.

“I’m so happy to collaborate with the Napa Valley Museum and to share my work with the community,” says the artist Lucy Liu. “Art has been an important part of my life and development since I was a child; it helps cultivate imagination and also fosters critical thinking skills. Supporting lifelong arts education is imperative and I am thrilled to be a part of this important endeavor.“

“The Museum is thrilled by the opportunity to present the first U.S. exhibition by this talented artist, whose thrilling works manage to be bold and exaggerated, yet shockingly intimate,” says Laura Rafaty, Executive Director of the Napa Valley Museum Yountville. “Lucy’s paintings and sculpture are both intellectual and emotional, reverential and revolutionary. They challenge viewers to re-examine cultural and gender stereotypes, while always retaining an essential humanity. This first U.S. exhibition of her work allows us to build on a season during which we’ve presented some of the world’s most provocative and acclaimed female artists, from painters Frida Kahlo and Juanita Guccione to photographers Diane Arbus, Imogen Cunningham, Margaret Bourke-White and Dorothea Lange. “Lucy Liu: One Of These Things Is Not Like The Others,” allows us to showcase the work of a living artist whose very public career in the performing arts, and tireless advocacy for the world’s children through UNICEF, uniquely inform her work as a visual artist. We are all looking forward to her visit as our Keynote Speaker at our February 25 fundraising luncheon, where we will hear her speak about the creation and inspiration behind these works and about her multi-faceted life and career.”

Due to adult subject matter, the Museum recommends that visitors under age 18 be accompanied by a parent (the downstairs history and art exhibitions are easily accessible for younger viewers). 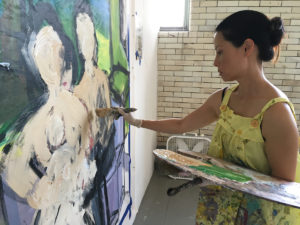 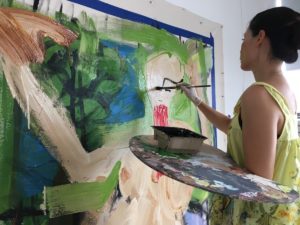