Reopening on January 11, 2020: our permanent history case dedicated to the California Veterans Home Yountville
plus a rotating exhibition of art and artifacts from the Veterans Home collection

This brand new permanent display in our History Gallery will educate visitors about the history and contributions of the California Veterans Home in Yountville, founded in 1884 and the largest of its kind in the United States. The display will also include rotating art and artifacts from the Veterans Home’s own collection, including rare mementos like WWII “sweetheart pillows,” uniforms, medals, letters and photographs evidencing the lives of the Home’s resident Veterans, which currently includes over 1200 veterans of World War II, Korean War, Vietnam War, Gulf War, War in Afghanistan, and Operation Enduring Freedom/Operation Iraqi Freedom.

Curated in partnership with the California Veterans Home in Yountville.
Made possible by a collaboration with the Friends of the Lincoln Theater and by the support of the Napa County Board of Supervisors and the Wells Fargo Foundation

The exhibit was curated by a team led by Veterans Home Senior Librarian Jennifer Allen and the Museum’s Manager of Exhibitions & Programs Ariel Loraine. Guests at the opening included California Veterans Home Yountville Administrator Fred Just, Museum Board of Trustee President Ronda Schaer, and Wells Fargo Foundation representatives Pam Rubio and her husband, Vietnam Veteran Chris Rubio. The current display, which also features large-scale photographs and objects on loan from the Home, will be featured at the Museum through July 7; a newly curated case will debut in November of 2019. 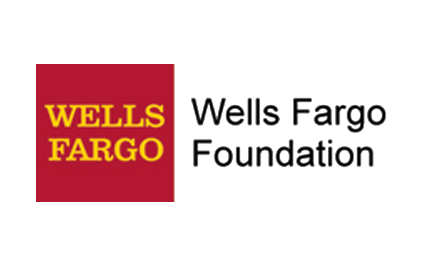 All photos below by MJ Schaer-Photography 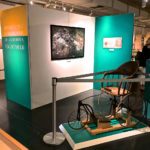 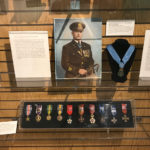 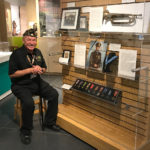